There are no words to describe this…

But just take a look at these pictures, please! They can speak for themselves.

Bianca Brinkmann, a 28 year old woman from Hildesheim, Germany had been a fila lover and a responsible breeder. She purchased her first 2 filas from Mrs. Yvonne Kreppner, "Cidonia" (Antonia v.d. Burgenstrasse) and "Ciano" (Artus v.d. Burgenstrasse). She took good care of her dogs, began going to dog shows and started a breeding kennel and named it "Kennel do Castelo Mariano". Ms. Brickman's troubles started a progressive road downhill when her husband left her, their young child and the dogs. She stopped working. Then she started to neglect the dogs, too. 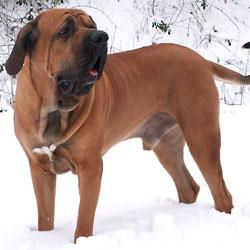 She had been a member of the CFB - CLUB DER FREUNDE DER FILA BRASILEIRO [Friends of the Fila Brasileiro Club], and during a litter inspection and control, the CFB established that Ms. Brinkmann's adult dogs were in below standard care conditions, a serious and scandalous position for a German breeder to be in. As a result of the severity of this fact, Bianca Brinkmann got a TWO YEAR BREEDING SUSPENSION from the club.

The CFB had offered her free dog food to help, but she refused and said that she had always cooked home made food for the dogs. The breeder of Antonia ("Cidonia") and Artus ("Ciano"), Mrs. Yvonne Kreppner, also offered help, but Bianca refused any help by saying that everything was under control.

On the German internet forums and social networks she was considered a responsible participant and a good owner. No one seemed interested in following up with the fate of her dogs and Ms. Brinkmann decided against giving her dogs up to an animal shelter.

Bianca Brinkmann has finally commited an act of extreme animal cruelty. She has forced her dogs to suffer an agonizing slow death by neglect and starvation that lasted several weeks. She closed her 5 year old Fila Brasileiro male dog inside a small room just under the roof of her house and let him starve to death, alone and without water. She also closed two adult female Filas (2 and 5 y.o.) in a cage measuring 80 x 80 cm inside a room next to her living room without food, without water. She locked the doors and starved them until both of them nearly died. While this was happening Ms. Brinkmann and her toddler were living in the house but they neglected hearing the dogs barking, howling and crying.

On New Year's Day 2010, while she was out, her father came to her house to see after the Filas. After discovering the condition the dogs were in and the horrific scene, he called the Police and Animal Protection. Finally, after the dogs endured months of agonizing and suffering, Ms. Brinkmann's father recognized the signals of desperation, took charge and got help.

The police recovered the two females to a veterinarian clinic in Magdeburg (Germany). The vets declared that the dogs had been deprived of food and water for 6 to 8 weeks. When found, each of them weighed about 20 kg. Her two 3 year-old daughters, Almeia and Afasia died. (One of the females from the first litter did not have a chance to survive and was put to sleep after two days. The other female was never found.)

"Cidonia" weighed 20 kilos when she was found, but survived. She is now recovering at the house of a fila lover and is gaining weight. The Fila male who was locked in the room under the roof was found dead and in state of mummification. 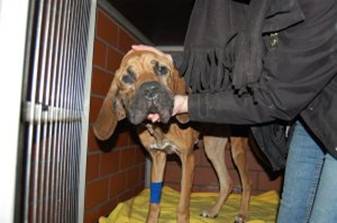 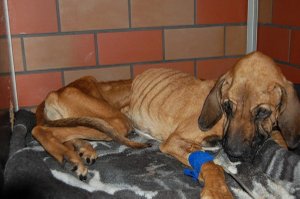 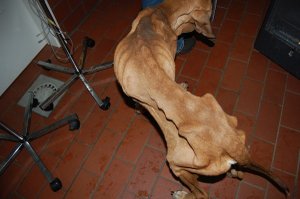 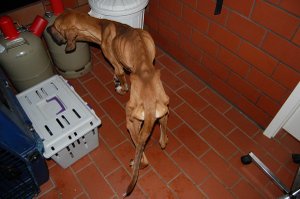